Today I had a tough day at work.  I was upset my whole drive home.

Two years ago, I would have called my husband, vented the whole way home, then called my mom and bitched some more, and then spent the evening just generally stomping and pissing about.

That was two years ago.

Today, I called Preston, talked only briefly, and ran upstairs to change as soon as I got home.  I pulled on my favorite running skirt  and shoes, grabbed the ol iPhone, and hit the trail.

50 minutes, and 4 miles later, I was feeling much, much better.  I was calm.  I had time to work stuff out in my brain.  I saw bunnies (4 of them!) smelled fresh honeysuckle, and watched the creek go by.  I also ran without any walking intervals just to see if I could.  The extra challenge got out some of that excess energy.

You can leave a lot out there on the pavement by the creek in the woods.  It's a hell of a lot more productive than bitching about it all day.

I go through phases of not writing here.  Sorry about that.  I've been a little burned out at work lately and it's translating to this overwhelming desire to stay the heck off the computer.

But, I'm getting a little room to breathe at the office, so I'm back!  How're things?

I've been running, spinning, and weight-lifting my little heart out.  I even did a 2 hour class with Tom last week (if you've ever been to one of Tom's spin classes, you know that I am now a certified athletic badass for not dying).   Weather has been wack around here - it's been colder this April than it was in January.  WTF?

But, I've still been hitting that pavement, and I've got some new gear that I wanted to share with you.  (Also, opinions are my own and I'm not being compensated for this - just bought this stuff and thought you might want to learn about it!)

1.  I've officially journeyed into the world of minimalist shoes with these sweet Kinvaras that I scored after my half marathon for mere pennies.  They're a few seasons old, but for $40, it was a pretty great way to try this out.

Verdict? I don't hate them.  They're great for short runs, but my foot was a little twingie (that's the technical term) after a 4-miler, so I think I'll just use these for the short runs.  They also make a strange noise on the footfall.  I don't know - there's something weird about it.  Must give them more of a chance. 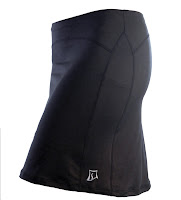 2. My new Happy Hour Skirt.  I LOVE LOVE LOVE this.  Capris get a little warmish in the summer months, but I'm still super self-conscious about my thighs.  (I know, I know, I do love them, but that doesn't mean I want them all out there and stuff.)  But this bad-boy makes me feel uber-sexy.  For serious.

Verdict? Go buy one.  Now.  It doesn't slip, has handy pockets on the thighs under the skirt, and the shorts don't ride up.  For reals.  Go get one.  They have them at fleet feet.  I wear a Large, and it's just right.  (I'm a size 12 most places if that gives you a gauge.) 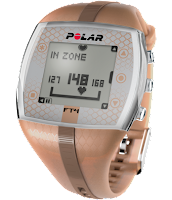 3.  Polar Ft4 Heart Rate Monitor - I bought this for 2 reasons: 1 - curiosity. 2 - REI coupon and Member dividend.  Good enough reasons for me.  I've been on the lookout for a while for a monitor - again, because I'm curious - and because I want to be more accurate in my calorie counts and knowledge.  I've worn it on 2 runs, a couple of walks, and spin class.  I was surprised how high it got running and how comfortable I still felt.  Bad?  I don't know, but I'm going to focus on keeping it in the "zone" and not letting it get too high.  They say that's a better way to endurance train, so I'ma give it a shot.

Verdict?  Nice to have if you're a data person.  I find it fascinating to figure out what I'm burning calorie-wise and if I'm phoning it in or really pushing it.  The aforementioned 2 hour spin class?  1004 calories. Yowza.  The watch itself is easy to use and the chest strap is pretty comfortable and is fabric, not plastic.  (But, remember, I'm used to a giant bra, so it wasn't that big of a difference for me.)  If you're in the market, I've been really happy with this model.

Anyone else have some great new gear for the spring/summer?

Have a great week, all!


Posted by Sarah Mann Willcox at 8:01 AM No comments: 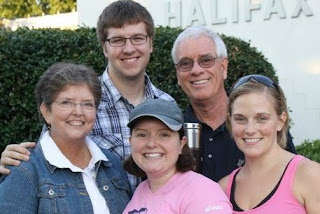